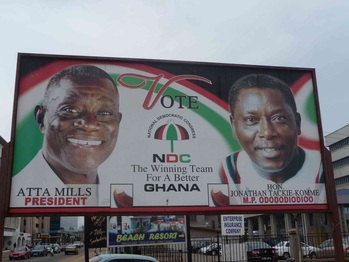 Campaign billboard from 2008 elections
I also have conducted research on voting behavior in Tanzania, Zanzibar, and Ghana.

Ghana shocked the world in 2008 by defying many “conventional truths” about African elections.  Firstly, a party that had been defeated in a previous election ousted the party that pushed them out, after spending eight years in the opposition.  Secondly, in a country where many ethnic groups cleanly nest into political parties, a presidency was won by a candidate who was losing after the first round.   Two surveys carried out by my co-author before and after the elections combined with interviews of MPs I conducted in the Ghanaian Parliament in 2009 shape the foundation of two manuscripts that explore what opposition parties do to court voters in competitive African regimes and further, what makes for the persuadable “swing voters” Africa was long though to lack.

"What Drives the Swing Voter in Africa" 2013. American Journal of Political Science (with Staffan I. Lindberg)
Replication Data available here.

In this paper, we evaluate what makes for swing voters in the 2008 elections in Ghana, one of Africa’s young democracies.  We offer a new count measure of swing voting and illustrate how alternative measures of the phenomenon are less robust in the context of a new democracy.  We make an important distinction between different types of reasons individuals might swing vote, highlighting the difference between how performance-based evaluations of incumbents and clientelism might win over or lose different voters differently.  Our paper finds evidence that clientelism remains a somewhat persuasive tool for courting voters but that by performing well in office on public and collective good dimensions, legislators can win over ballots from citizens who previously cast votes against them.

Our paper analyzes the strategies the National Democratic Congress—Ghana’s main opposition party in 2008 and the current governing party—used in order to oust the incumbent National Patriotic Party.  The paper finds that the evaluations which mattered most to opposition voters were oriented towards public and development goods, in contrast to much of the literature that claims African politicians’ careers live and die by private goods distribution.  The piece enriches the larger economic voting literature by exposing types of performance evaluations outside of general sociotropic or egotropic economic assessments that also shape voting decisions.